The United Arab Emirates has a substantial Indian expatriate population, with estimates ranging from 30% – 60% of the local population. Wikipedia cites that the labour force of the UAE are 99% foreign workers, and a substantial number of the workforce in Dubai and Abu Dhabi is compromised of Indian nationals.

In 2005, an estimated $7 Billion USD was remitted from the UAE to India, with more than $4 Billion of that being sent to the Kerala region alone.

Speaking to my Indian friends here I was initially quite shocked to hear that banks in the country offer Fixed Deposit rates of 9%+ with minimum deposit terms of only 1 year.
For example, take a look at the NRE Deposit rates offered by Standard Chartered Bank in India: 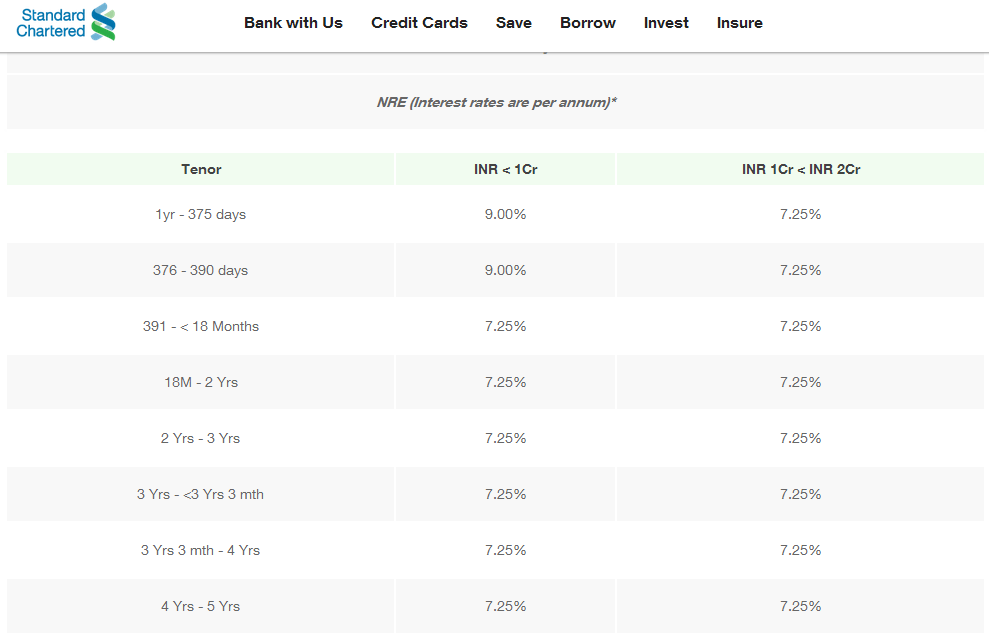 Now, to give this some relativity, the average return of the US S&P500 for the past 10 years was around 9.15%* this account offers almost the same rate of return without putting your capital at the mercy of the markets.

Sampat transfers the money from his INR₹ account back to his USD account and is anticipating USD$202,522 – the bullshit Correspondent Bank Fees

But when the transfer goes though, he notices he only has USD$181,098.

Not only has his $185,800 deposit not gained any interest, it has in fact lost money and returned $4,702 LESS than he initially deposited.

Sampat would have been better off had he driven out to the desert and buried his $185,800 in the ground, then come back a year later and dug it up.
But his account grew at 9%.

The headline rate of any savings account or investment product is, unless stated, the Nominal Interest Rate.
That is to say, the rate at which your capital will appreciate over the given time.

What we need to take into account is the impact of inflation.
Inflation is the enemy of interest.

Inflation is the reason that your rent goes up each year, or the reason you get a pay-rise each year.
Both of these are examples of when you either pay more for something (increased rent) or sell something for more money (your work for a higher salary)

Let’s imagine that you want to buy a milkshake that costs $100 and you live in a country that is experiencing 3% inflation per year.
To buy the same milkshake next year, you can expect to pay $103.

Today you know that you want to buy the same milkshake next year, so you place $100 into an investment that pays 3% per year.
Next year you take out the $103 in your investment ($100 +$3 interest) and buy the milkshake.

But your Real Rate of Interest is 0%
Your Purchasing Power grew by 0% as the amount in your account could buy you the same stuff last 12 months ago as it can now.

As you can see, the Real Rate of Interest can be worked out using the following:

To work out the Real Rate of Interest on the 9% fixed deposit that Sampat took out, we need to know the Inflation rate in India in order to complete the missing data point in the equation.

As of March 2014, the rate of inflation in India is given as 8.31%
For the previous 12 months the inflation rate we between 8.03% and 11.16% and was above 9% for 8 of the 12 months.
If we consider the impact of the compounding growth rate here, the average rate of inflation can be approximated at around 9.8% for the year.

Now, we know the Fixed Deposit account paid Sampat a return of 9%.
The Inflation rate was 9.82%

This, combined with the weakening of the INR₹ against the USD come together to mean that in our scenario Sampat realizes a return of -2.53% on his $185,800 over the 12 month period.